Tsetang, 3560 m above sea level and 191 kilometers away from Lhasa, is the political, economic, cultural, and transportation center of Shannan City.

The Shannan region is the birthplace of the Tibetan people and Tibetan culture and covers almost all the “firsts” in Tibet such as “the first palace -Yumbu Lakang”, “the first king—Niechizanpu” and “the first Buddha hall-Changzhu Temple”.

As the first palace in Tibetan history, Yumbu Lakang was built by Niechizanpu and has a history of more than 2,100 years. It was built on the Zhaxiciri Mountain, 11 km southeast of Tsetang Town. Yumbu means “doe”, named for the mountain resembling a doe, “lakang” means “temple “. Later Songzanganbu changed it to a temple. When Princess Wencheng first came to Tibet, she and Songzanganbu lived here every summer. To the fifth Dalai Lama, he built a four-cornered Zanjian golden dome based on the original building and changed it to the Yellow Sect Temple. The scale of the monastery is not large, but it stands on the top of the mountain and can overlook the landscape of Yalong River Valley and the idyllic scenery.

Known as “Tibet’s first monastery”, Samye Monastery is 38 kilometers away from the town of Tsetang and it is the first monastery in the history of Tibetan Buddhism that has all three treasures of Buddha, Dharma, and Sangha. Built by Chisongdezan in 762 AD, the buildings in Samye Monastery are laid out according to the description of the universe in Buddhism scriptures, integrating three architectural styles of Tibetan, Han, and Indian.

Built-in the period of Songzanganbu, Tradruk Monastery is one of the earliest Buddhist monasteries in Tibet and belongs to the Gelu Sect.

According to legend, like Jokhang Monastery, it is also a geometric monastery that conquered Tibet’s demons. The Peal Tangkha of this monastery is made of 29,026 pearls and different precious stones and is a rare treasure in the world.

Founded by Rigzin Terdak Lingpa in 1676 and located in Zhanang County, Mindroling Monastery is one of the six major Nyingma monasteries in Tibet. It has been destroyed and rebuilt many times in history and the most recent restoration work was in 1983.

Mindroling Monastery covers an area of about 100,000 square meters, and the main building is the three-story Zulakang Buddha Hall. On the walls of the Buddha Hall are painted multi-armed, sacred Buddha statues, which is a major feature of the Nyingma School and is also a representative of Tibetan Tantric art. 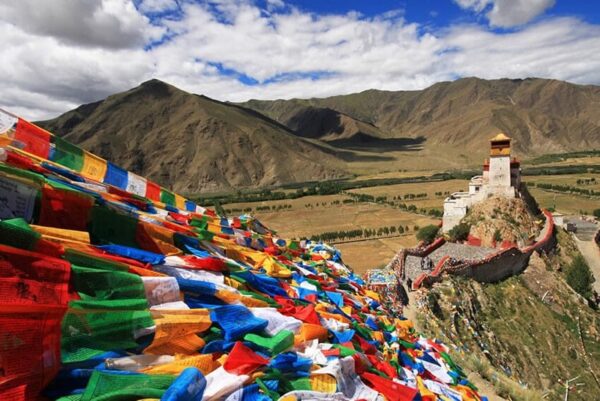