Shaxi Ancient Town, located between Lijiang and Dali, is a small and peaceful basin with an average altitude is 2100 meters. Classified in 2002 on the list of the most endangered architectural heritage by WMF (World Monuments Fund), Shaxi was used to be an important and prosperous hub along the Ancient Tea Horse Road which has a history of more than two thousand years and was an international trade route with the caravan as the main means of transportation. Shaxi was built in the late Yuan and early Ming dynasties, the center is Sifang Street. All the streets are stone-paved, and the houses on both sides are front stores and backyard style.  With the decline of this famous road, it was gradually forgotten. But this also helps retain the original appearance of this town, and it has become the only surviving market on the Ancient Tea and Horse Road.

What to Do in Shaxi?

Located 30 km from the town of Shaxi, on the same road as the Ci Yin An temple, the grottoes are distributed on the cliffs of Shizhong Mountain and have a history of more than 1,300 years. There are 16 grottoes and 140 statues, all carved exquisitely, vivid, and rich in local ethnic colors, which are praised as the “pearls of Yunnan”.

The Buddhist sculptures, some of which are among the most beautiful in China, give an idea of ​​life at the Nanzhao court in the 9th century. Indeed, the goddess Guanyin is often represented there as well as other Buddhist figures, proof that the Bai who erected these sculptures had adopted this religion at that time. Among the most symbolic, cave number 6 contains a statue of Buddha Sakyamuni, number 7 that of Guanyin, number 8 “the stone treasure” (black rock in the shape of an enormous vagina), number 11 for its representation of ‘a Persian nobleman and number 13 for his statue of Acuoye Guanyin. Caves 15 and 16 display representations of a black giant particularly honored by the Bai who brought him into their Benzhu pantheon.

The most lively day in the ancient town of Shaxi is every Friday. There is still a bazaar that originated from the Tea and Horse Road period. Peddlers will drive to Shaxi to sell goods on that day, such as fruits, vegetables, daily necessities, clothes and footwear, Chinese medicinal materials, various farm tools, and even livestock. And villagers in more than a dozen nearby villages will also buy what they need on the day of the market, and some even stock up for one week until the next market.

There are several possible hiking routes:

One day hike through the high mountains of the Shaxi Valley to reach a village of the Yi minority. You will be greeted by the villagers with a welcome lunch. The hike takes approximately 3-4 hours to go up to the village and 2-3 hours to come back down. We recommend that you get up early in the morning to do the uphill hike at dawn and breathe in the morning’s fresh mountain air, which makes walking easier.

Day 1.From Shaxi village to Mapingguan hamlet for a lunch break before continuing to Misha where we will spend the night with the locals. We will walk at an altitude between 2100 and 3188m (small pass). Accommodation and dinner with a local family.

Day 2. Early start for a walk around the village, departure for a 5-hour downhill walk to the village of Misha through ancient forests with very large trees covered with moss. This village is known to be home to one of the largest salt pits in the region. After Misha’s visit, we drive back to Shaxi. 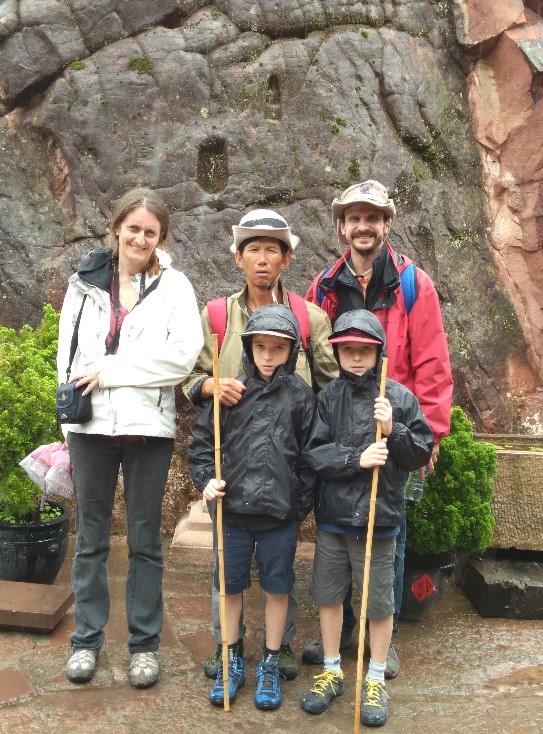 With its unique climate and geology, Yunnan is undoubtedly one of the richest places in the world for wild mushrooms with a much larger picking season than in Europe (from May until the end of September ). Of the approximately 140,000 types of fungi believed to exist on Earth, only a tenth have so far been listed. Three thousand are considered edible and no less than 850 varieties can be found in Yunnan. 50,000 tonnes per year are consumed locally in Yunnan province alone. Besides being a natural green food, the mushroom also has pharmacological effects in curing cancer and various diseases.

How to Get to Shaxi?

You can take a bus from Dali or Lijiang to Jianchuan County and then transfer to the green rural minibus to Shaxi Old Town.

The most convenient way is to take a private vehicle, which directly transfers from/to your hotel in Dali or Lijiang to save time and language troubles. Besides, in this way, the Shaxi and its surrounding nearby attractions could be visited easily. 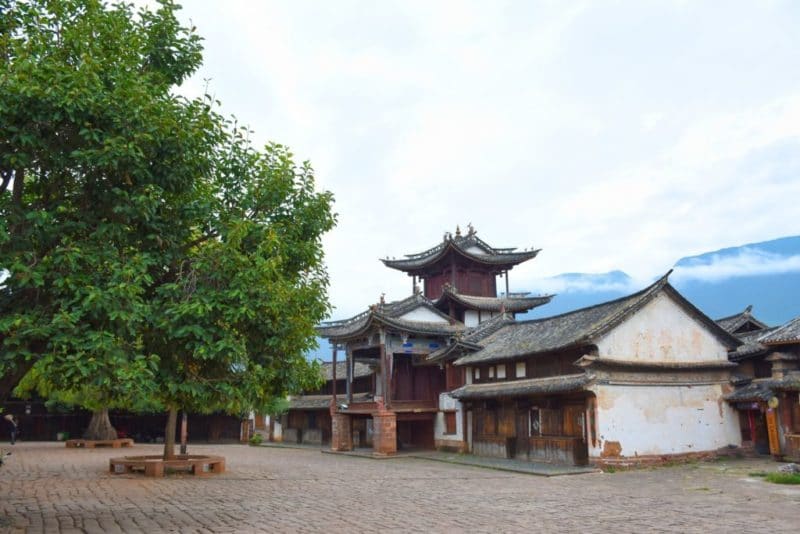 It has a great attraction for traditional Bai music enthusiasts of the Shaxi Singing Festival, held from July 27th to 29th of the lunar calendar every year at Shibaoshan.
During the festival, the Bai people from all around the Dali and Lijiang region will gather in Shibaoshan to perform the song and dance, and display a lot of lively cultural traditions to the local crowds. Meanwhile, it is a good opportunity for the young people of Bai through “improvisational antiphonal singing” to find a partner. The festival is rarely visited by tourists but the reputation of its show is growing year by year. On festival days, the entrance fee is lowered to just 2 RMB.

Every year, on the 8th of the second lunar month, the Bai people living in Shaxi, held the Prince Festival to commemorate the prince (Sakyamuni) who gave up the throne and founded Buddhism.
The effigies of the crown prince and Sakyamuni are carried in procession around the four cardinal gates while the children dress up as princes and paraded in carts or bicycles.

Considered” the oriental carnival”, the Torch Festival is one of the biggest events in the whole Dali region and is celebrated by ethnic minorities including the Yi, Bai, Naxi, etc. Traditionally, on June 25 of the lunar calendar, villagers installed a large torch up to 20 meters high, decorated with fruits, fireworks, and pine branches with flags bearing auspicious Chinese characters. Burning torches represent the prosperity of future life and show the great significance of fire: to light up the roads, warm people’s bodies, and repel insects and beasts. During the festival, people wearing colorful traditional ethnic costumes gather to enjoy nights of fire and send each other wishes for a better life.

Find out about the various festivals and festivals in the Shaxi region before planning your trip. 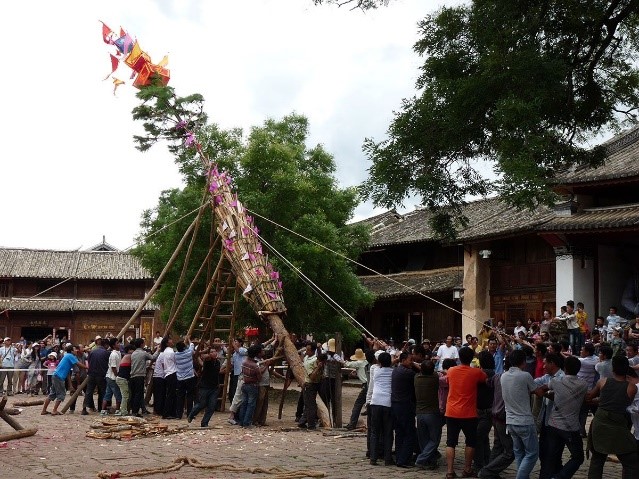 The Bai “Sanfang Yizhaobi” style architecture is characterized by three exterior buildings forming a U with a fourth front wall that acts as a screen. In the center is a large courtyard surrounded by doors and windows intricately carved with motifs of birds and local flowers. They were made by craftsmen from neighboring towns such as Dali and Jianchuan.

The front screen wall, sometimes known as “the shiny wall” serves a dual purpose. The first is to block the winds and the second to catch the sun’s rays reflected in the early evening. During the winter months, when the sun’s rays are weak, this allows for an extra hour of light and heat.

The main wall is usually decorated with either a single character, such as “Fu” for fortune, “Shou” for longevity, “Xi” for happiness, or a short vertical verse like “Cai Yun Nan Xian” (colorful clouds appearing in the South) and sometimes “Long Feng Cheng Xiang” (a dragon and a phoenix signs of good omens).

In an area famous for its year-round spring weather, it’s hardly surprising that Bai family life revolves around the courtyard. Inside the patio, the flower beds are decorated with brightly colored flowers and bonsai trees articulated around large mosaics of stones from local rivers. The tiled roofs offer graceful curves reminiscent of certain Thai temples.

Most houses have two floors, the upper bedrooms are used for storage, while the rooms on the lower floors are living space. The foundations are built from rectangular stones from local quarries that can weigh more than three hundred kilos each. The walls were made of beaten earth (‘chong chang’) painted with lime. The internal partitions also receive an artistic treatment in the form of murals.

This architectural model, articulated around the courtyard, is found in many provinces in China.

Where to Eat in Shaxi?

Great atmosphere and delicious vegan dishes. The open kitchen is the heart of the restaurant, and you can watch your food being prepared from scratch. The staff is kind and accommodating.

There is a small restaurant in this guesthouse and the food is terrific. Menus are both in English and Chinese on an electronic tablet, so easy to choose western food or local Bai flavor. 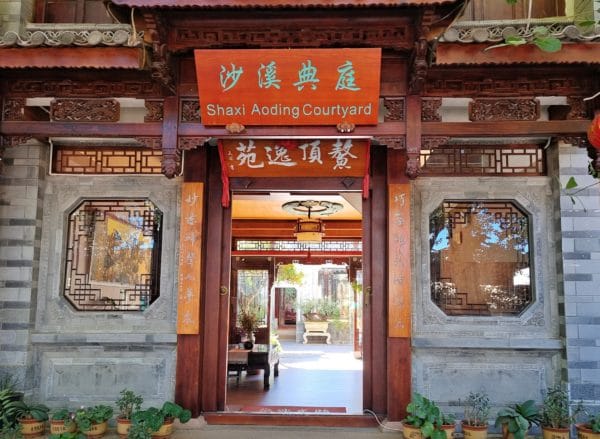 Xiluxiaoyuan is a Bai family-style restaurant managed by an old couple in their yard. The grandma is the chef, and the grandpa is the cashier. The ingredients are fresh and taste pretty good and could eat some local seasonal wild vegetables. 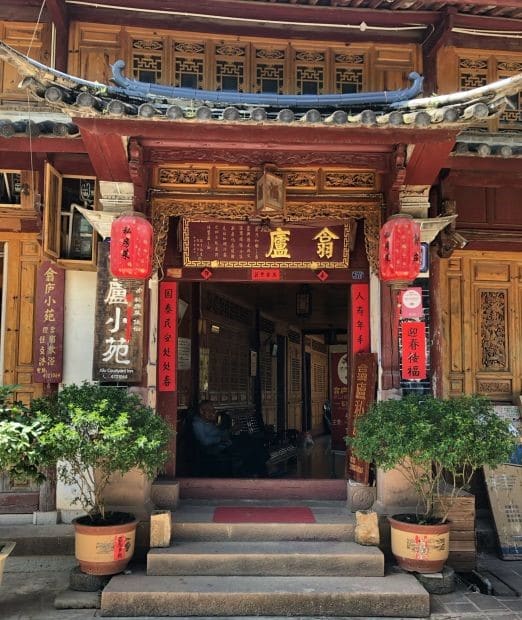 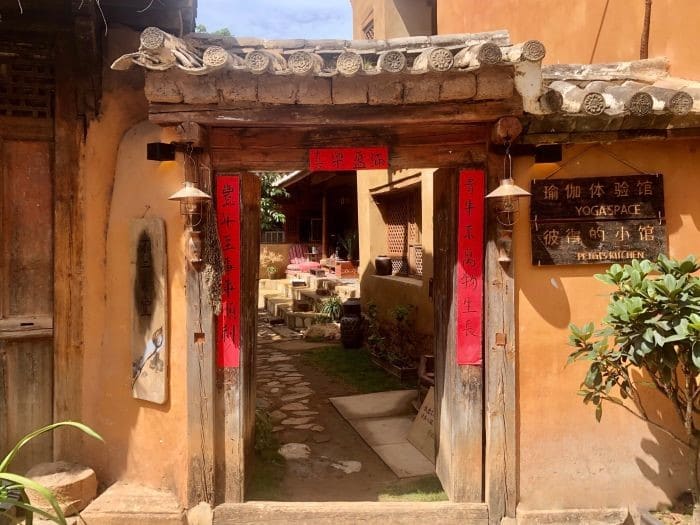 Trips and Tours Ideas in Shaxi 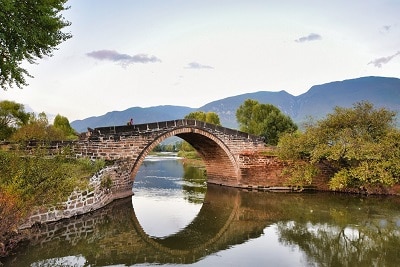 7 days | Dali, Lijiang, and Shangri-La
Stroll around the charming old villages of Dali and Lijiang. Discover the stunning scenery and Tibetan culture of Shangri-La.