The Region is situated in the southern part of China, facing the Beibu Gulf on the South China Sea, and has a border with Vietnam to the southwest. Since it is a neighbor of Yunnan, after the tour of Yunnan, we also recommend that tourists can visit Guilin and Longji terraces in Guangxi.

Guangxi has a subtropical monsoon climate: rainy, warm and humid, with an average annual temperature of 15.4° C, average annual rainfall of 1124.1 mm /year.

The rainy season in Guangxi is from April to September (especially in May and June, which may cause rainstorms). It is recommended to visit from September to March.

Temperatures and precipitation of Guangxi 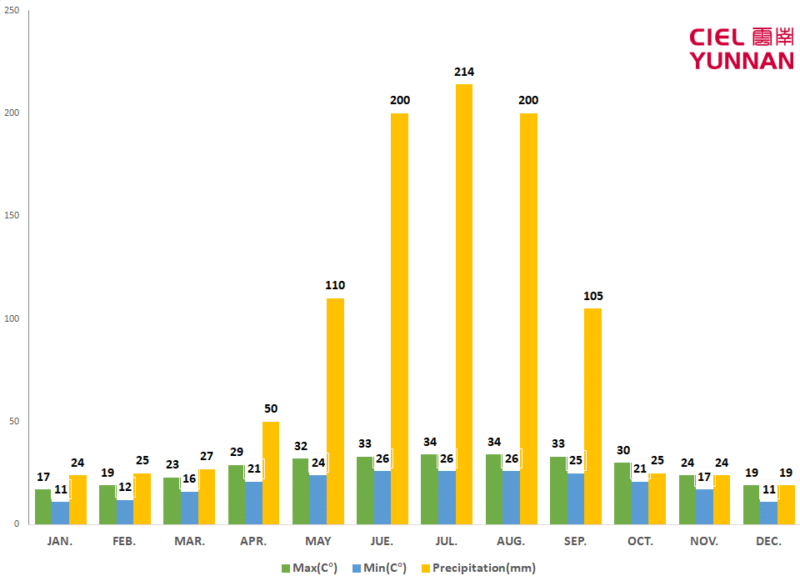 A Little History of Guangxi

The area was originally belonged to one section of the territory of Baiyue tribes and officially became part of China in 214 B.C when the army of the Qin Dynasty claimed most of southern China.

After the founding of the Republic of China, Guangxi served as the base for one of the most powerful warlord cliques of China. Led by LuRongting and others, the clique was able to take control of neighboring Hunan and Guangdong provinces, and until it fell in the early 1920s. It was eventually replaced by Li Zongren and Bai Chongxi. Guangxi is also noted for the Baise Uprising, a communist uprising led by Deng Xiaoping in 1929.

In 1944, near the end of World War II, Japan invaded Guangxi and most major cities in Guangxi came under Japanese occupation. From 1945 to 1949, this region was controlled by the Kuomintang. After the People’s Republic was established, it officially joined the PRC.

As a multi-ethnic inhabited region, in addition to the main ethnic group Zhuang, there are 11 other ethnic groups live in Guangxi such as Han, Yao, Miao, Dong, etc.

The Zhuang nationality is the most populous minority in China, with a total population of 18 million, mainly living in the southern part. The Zhuang nationality was developed by one branch of the ancient Baiyue. As early as the Song and Yuan Dynasties, the Zhuang region entered the feudal lordship society. The Zhuang people have no unified religious beliefs. After the Wei and Jin Dynasties, with the introduction of Taoism and Buddhism into the Zhuang region, Polytheism based on primitive religions, and combined Taoism and Buddhism, was formed. In the middle of the 19th century, Christianity and Catholicism were introduced one after another but didn’t impact that much.

What is Guangxi's most popular food?

Influenced by the Zhuang culture and the climate, the gastronomy of Guangxi is distinguished by several renowned dishes including:

Trips and Tours Ideas in Guilin and Guangxi 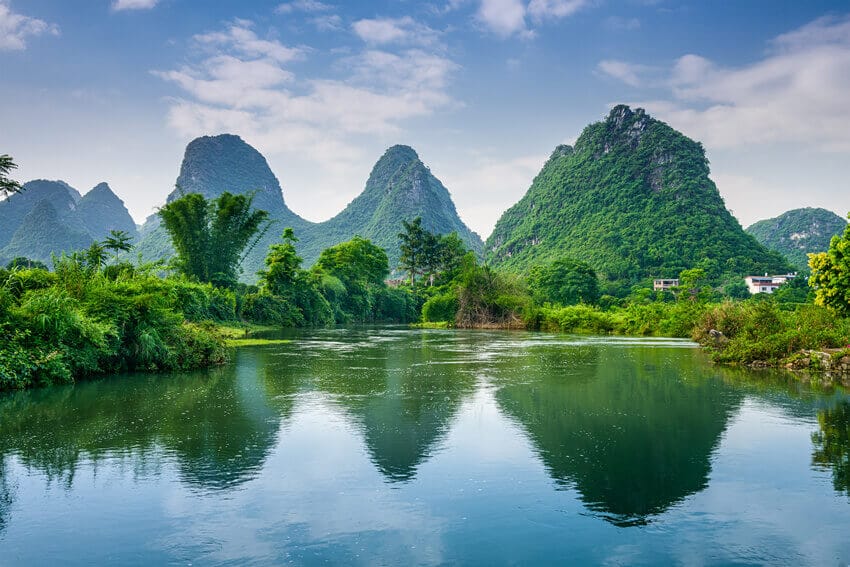 16 days | Beijing, Xi’an, Guilin, Shanghai, and Suzhou
The most beautiful places in China on a trip: the capital of the country, the prosperous coastal metropolises, the scenery of rice terraces and bamboo.