Dali resides on a plain that is quite fertile. It is in the middle of Erhai Lake and the Cang Mountains. There is a mild climate that is spring-like all year round in Dali, presenting a graceful ambiance and gorgeous views of the town. Dali has a bit of a laid-back atmosphere. As with a lot of places in Yunnan, travelers frequently come here to see the quieter side of China.

Dali is in the middle of Bai, a minority region. It is also in the heart of the famous Nanzhao Kingdom, an ancient capital. Residents of Bai (which translates to “white” in the Chinese language) have a reputation for producing marble and silver. You’ll find no shortage of incredible decorations to browse here. The houses in Bai are typically white and tend to have mesmerizing paintings hanging on exterior walls. Dali should be one of the places you check out if you are thinking about visiting Yunnan.

There are plenty of places to explore in Dali, you can arrange a one-day tour or a few-day tour according to the distance of the destination.

•  One-day tour: The old town is full of narrow streets paired with gorgeous Bai houses. Be sure to check out the Three Pagoda Temple, which is the emblem of Dali. The Erhai Lake region can be considered an inland sea that is quite veritable. Endearing but small Bai villages can be found close to the lake, including Wase, Shuanglang, Shaping, Zhoucheng, and Xizhou. You can visit the colorful marketplace to take home some of the region’s charm. You can also go hiking directly from the town to Cangshan Mountain, which you can get to by foot, cable car, or chairlift. Some people like to explore Erhai Lake by bike. Cycling to Xizhou from Dali (and vice versa) along the Erhai Lake will take about half the day, you would have a great harvest.

•  Two-day tour: Spending one night and two days in Weishan, Jianchuan, Nuodeng, or Jizushan Mountain are the better choices for you would have enough to visit them and their surrounding attractions.

How to Get to Dali?

Dali Airport is 13 kilometers away from Dali downtown. At present, the total number of airport routes has reached 20, of which 16 are direct flights outside the province (the navigable cities are Beijing, Shanghai, Tianjin, Xi’an, Wuhan, Changsha, Hangzhou, Nanjing, Chengdu, Chongqing, Mianyang, Nanning, Yibin, Wenzhou, Shantou, Lanzhou, Guangzhou). 2 routes from Kunming to outside the province (Guangzhou and Shenzhen), 2 routes within the province (Kunming and Xishuangbanna)

The city happens to be connected to many cities in the nation via its rail network. You’ll be able to get to Dali from Beihai, Nanning, Guilin, Guangzhou, and Kunming. This rail network facilitates transit for these tourist-centric cities.

The best way to get to Dali from Kunming is to take the high-speed train.

You can visit this region at any time of the year thanks to its somewhat mild climate. Most people visit Dali between March and June, as well as between September and November. During those two periods, Dali’s weather is almost perfect in the sense that it doesn’t rain very much. When the sun shines, Erhai reflects the blue sky as if it was a mirror. The visual can be likened to a pearl sitting on a plateau.

Despite its 2000 m altitude, you won’t find very much snow here in the wintertime. Also, the climate tends to be quite mild in the daytime and somewhat colder during the night. Many China-based expatriates appreciate the calm and soft winters in Dali, especially ones who spend time with family during the holiday season. Summer rainfalls are not frequent in comparison to other countries in Asia. The spring and fall seasons are the best times to visit Dali, though the first weeks of May and October are considered holiday periods for the whole country. For information about Dali climate and weather.

To know more about the climate in Yunnan: When to go to Yunnan.

Temperatures and precipitation of Dali 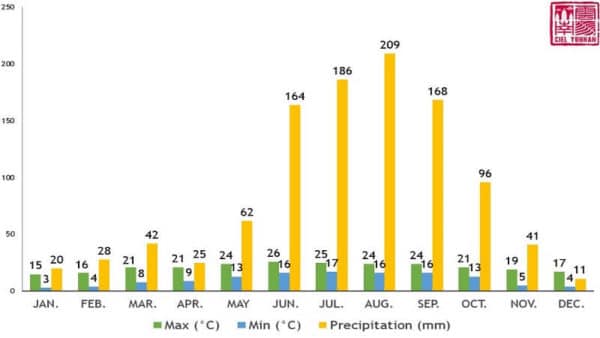 What to Do in Dali?

Cooking classes that last half the day are something many visitors engage in when visiting Dali. Consider visiting the local market or participating in a cooking class, where you will learn how to make all sorts of Yunnan’s specialty treats. You’ll be able to eat whatever you prepared for lunch!

To enhance your culinary experience, visit the tea plantation, which is quite a distance from Dali. You can pick your choice of tea here, then take the necessary steps to prepare it. You’ll also be able to take the tea home with you!

The Batik craft is something that Dali happens to be renowned for. Take the time to learn how Batik is made. The souvenir you take home will mean something because you are the artist.

A Little History of Dali

The majestic architecture of the ancient city of Dali dates back to the Ming and Qing dynasties, but Dali history is far older than those buildings.

As one of the earliest cultural birthplaces of Yunnan, the history of Dali began in the 4th century.

In the middle of the 7th century, six larger ethnic tribes appeared in the Erhai area. In 738 AD, with the support of the Tang Dynasty, Nanzhao Kingdom was established by Yimouxun who was one Yi leaders of the local tribes. Weishan, the birthplace of the Nanzhao Kingdom, was influenced by the religion so there were many Buddhist caves in Shibaoshan which was the natural barrier of Weishan Old Town.

The Kingdom of Nanzhao covering an area of present-day Yunnan, Guizhou, southwestern Sichuan, as well as northern Burma, Laos, and Vietnam. It also conquered the territory of the Tang Dynasty: the Sichuan Basin, so the military of the Tang Dynasty broke the border of the Nanzhao Kingdom. Nanzhao had fallen apart and was overthrown in 902.

The Kingdom of Dali (937–1253) was established by Duan Siping(the Bai general)in 937, it lasted for more than 300 years. Under Bai’s rule, the territory expanded continuously and its economy prospered. Trade with Burma, Vietnam, Malaya, India, Persia, and other countries has been established, and Buddhism has begun to flourish. The kingdom reached the apex of its power until 1253, Kublai Khan led his army from the Qinghai-Tibet Plateau to invade the Dali Kingdom and ended it. Many temples and pagodas were built during the period, they witnessed the rise and fall of the Dali Kingdom. Such as the Gantong Temple, Shenyuan Temple, and the most famous one, Chongsheng Temple. The Chongsheng Temple was destroyed during the Muslim Rebellion, but the Three Pagodas of Chongsheng Temple stands still though suffered from some severe earthquakes.

In 1382, the Ming Dynasty occupied Dali and take over it, established government, and the system continued to the Qing Dynasty.

Where to Eat in Dali?

A pleasant place for people to enjoy both western and Chinese food.Good quality freshly cooked food and friendly English-speaking staff. 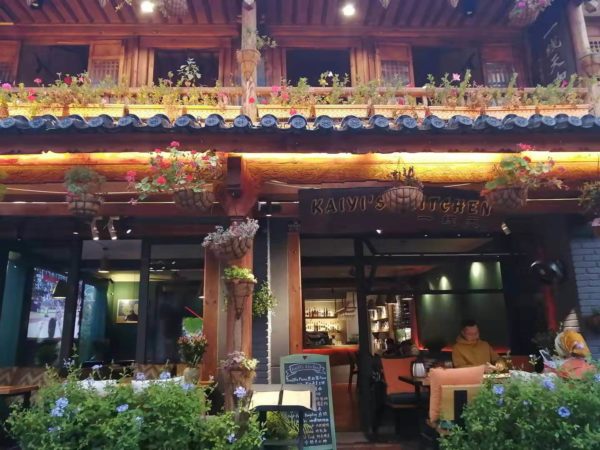 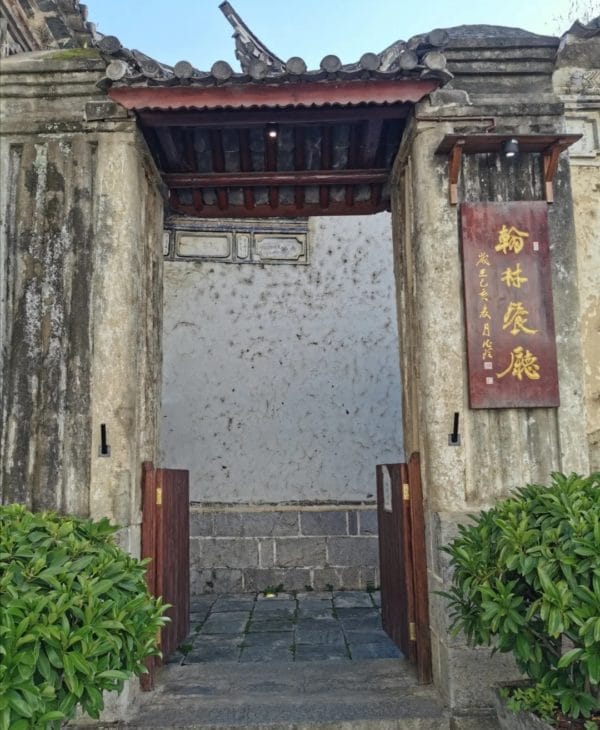 3. Xizhou Keting Restaurant 喜洲客厅
The quaint courtyard provides coffee and western food, which is a good choice for those who are not used to eating local food. 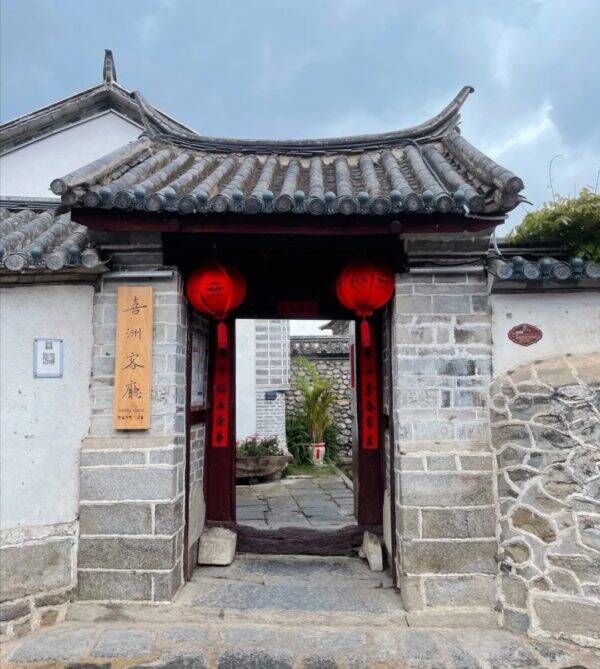 Local specialties Dali is renowned for:

You can find more detailed information on the gastronomy of Yunnan on this page: 10 unique Yunnan food.

Finding a Hotel in Dali

We recommend the hotel by the distance to the Ancient Town of Dali, E-Outfitting Boutique Hotel and Yanyuan Mountain Retreat are closer to the old town; The Linden Center Hotel and the Sky Valley Heritage Boutique Hotel are situated in the village of Xizhou, 30 minutes from the Dali old town, both tranquil hotels used to be comprised of authentic conventional Bai buildings. The meticulous customer service they offer can make you feel right at home.

Discover our selection of the best charming hotels located in Dali and its region, meeting all comfort and price ranges on the dedicated page of our site.

This selection is the result of our long experience and the positive feedback from our customers. Please take into consideration that in some more remote destinations, the choice of infrastructure and the range of comfort is sometimes limited. In this case, we do our best to retain the best establishments. 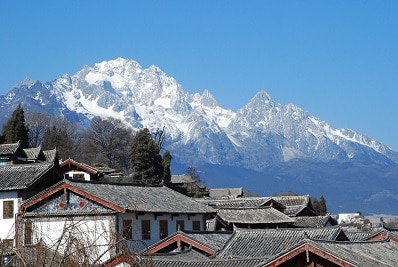 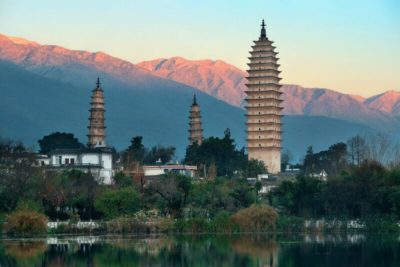 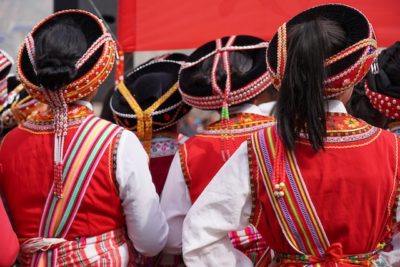